Yesterday, after watching question period from the visitors’ gallery of the House of Commons (which, by the way, was a profoundly offensive experience in ways I’ll attempt to elaborate on later), the Green Party’s Finance Critic Peter Graham and I headed down to the Railroad Committee Room to watch Jim Flaherty, Minister of Finance, deliver the budget on closed circuit TV while we simultaneously read copies that were made available. Meanwhile, deputy leader Adriane Carr (who had managed to get into the budget lockup, even though unlike at the provincial level the government does not explicitly provide entrance to the Green Party) was down the hall, in and around the foyer of the House outlining the Green Party’s reaction to the budget.

One of the first things Peter and I noticed was that this thing everyone is calling a budget—well—isn’t one. It’s a 400-page narrative (technically called a “budget plan”) that describes, using far more words than numbers, where our money is being spent. The result is that some details continue to be missing, though we do get a general sense of the direction: new spending in the wrong areas, no new spending in the right ones, and the wrong kinds of tax cuts and shelters that don’t benefit middle- or lower-income Canadians, nor do they offer the kind of economic security that’s needed right now.

Then word started to float in that Dion had announced the Liberals will support this government’s budget. They called this budget “watered down,” saying it was “a mile wide and an inch deep.” And now they’ll vote in favour of it.

In other words, they have officially taken the position that they will support mediocrity. This has many key Liberals understandably upset, including Warren Kinsella who called the Liberal response pathetic, and one of my favourite Liberal bloggers A BCer in Toronto (aka Jeff) who asked the same question I did several posts ago: “If not now, when?” (Actually, Jeff’s so upset that if you read his post to the end you’ll realize we may not be able to call him a “Liberal” blogger for much longer.)

I don’t blame Liberal supporters for being frustrated. Our country is in desperate need of strong economic leadership; we cannot afford an official opposition that accepts anything less in a time of emerging uncertainty and, conversely, great opportunity.

And here’s the thing. According to both the Globe and a Liberal MP, my by-election opponent Bob Rae is the key person who provided the “leadership” within the Liberal caucus that resulted in them voting in favour of something that, by their own admission, is nowhere near adequate. Meanwhile, economists and observers are very concerned that this budget brings us dangerously close to a deficit in the face of a looming economic slowdown, while others (including the Green Party) rightly point out that there’s almost no vision here for how we can take advantage of the economic opportunities presented by new green-collar jobs and green innovation, nor is there any vision to build stronger, more affordable, world-class cities.

Up until now I’ve been going pretty easy on Bob (he’s a well respected individual who I’ve believed would make a competent MP), but I’m not sure I can anymore. We cannot afford a Member of Parliament who’s willing to accept mediocrity. Especially when there’s the potential to amount to so much more. Especially when there’s reason to believe they did so for personal, rather than principled, reasons. Canada deserves better. Toronto Centre needs better.

Further to my post yesterday, in which I question how my Liberal opponent could justify propping up this government any longer, two prominent Liberals (both bloggers, one a sitting MP) weigh in.

A BCer in Toronto writes, in part:

There’s a few roadblacks in the way though, besides Stephane’s lack of musical ability. First one: the budget. The first votes are going to be in a few weeks, well before the byelections. What does Bob propose we do on the budget. Does he want us to vote in favour of what’s going to be a minimalist budget that does nothing to address the worsening economic situation, and prop-up this government that stands for everything we don’t? Or would Bob rather we prop-up this government by abstaining, and look the laughing-stocks again?

…So, while I like Bob’s theory, it’s the practice I have some issues with. If he has some brilliant plan for getting us past the budget vote without looking like complete tools, I’d love to hear it. Maybe the leaker forgot to tell Jane Taber that part.

Nervous nellies, buck up. Find your cojones. The election train is moving out of the station. Get on board or get out of the way. We cannot prop-up this government any more.

And from Garth Turner:

Much has been made this week of an election call. If you believe the media, Liberals reacted by forming a coherent and fierce battle group around the leader. Then fired inwards.

True enough, some, a few, of my caucus colleagues just love to talk about how they fear going to the voters. I should know the refrain by heart, since Iâ€™ve heard it from a half-dozen of them for an entire year. Lately the Lib Pacifist Movement has even become a little organized, and found a champion in a former leadership contender. Miraculously, his words in our inner-most sessions have ended up on the front page of the next dayâ€™s daily.

Well, for us poor farm boys from Halton, this is all a little hard to understand. Seems to us youâ€™re in politics for reasons of principle and passion, not just for partisanship. You know why youâ€™re here. If you believe Stephen Harper is screwing up Canada, then you fight the guy. You take up arms for overtaxed middle class minivan moms, for laid-off auto workers, for aboriginals, for the suffering environment, for income trust investors, for those in poverty and those who thought by electing this guy theyâ€™d get a leader who would keep his promises. 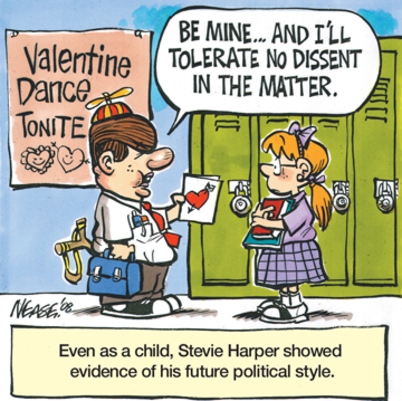 I’m not really clear on why. He says he’ll “explain in the car.” I’m pretty sure it should be taken as a compliment.

She’s doing great since her hip replacement last week, by the way. She’s been discharged from the hospital, and was scheduled to be on the Current this morning. Come to to think of it, maybe someone should kidnap her and force her to rest for Pete’s sake.