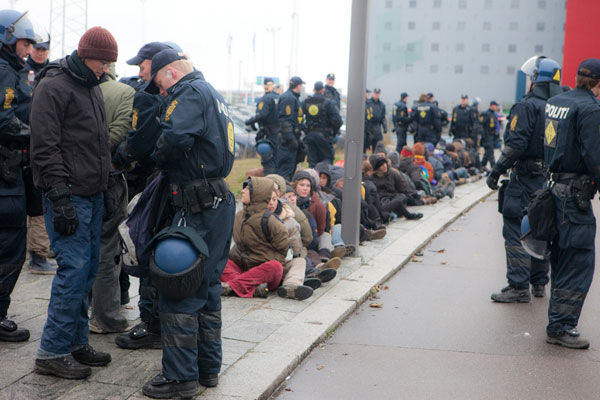 Every morning at 8am in the bowels of the Bella Center, Michael Martin, Ambassador for Climate Change and Chief Negotiator for the Government of Canada, holds a briefing for Canadian delegates. Intrigued, I caught the conference shuttle at 7am and made my way through the crowds and security, down the long hallways towards where the delegation offices are located. Canada’s offices, like the others, are small, temporary structures: the UN equivalent of an elementary school portable. I went trough a door and found myself sitting in the front row, feet away from the chief negotiator.

The purpose of the meeting is for Martin to update on how talks are going and to take questions and comments from those in attendance. The discussion contained a lot of detail and all of the acronyms you can expect at a UN meeting (REDD stands for Reducing Emissions from Deforestation and Forest Degradation, AWG-KP refers to the Ad hoc Working Group on further commitments for Annex I Parties under the Kyoto Protocol, etc). I was initially impressed both with the knowledge displayed by the NGOs asking questions and by the detail of Martin’s answers. What also impressed me was that comments and opinions were explicitly welcomed. When a labour leader asked a question about a particular component of an agreement, Martin’s response was to say that he wasn’t yet familiar with the specifics but would welcome input on what Canada’s position should be.

In this way, Martin comes across as (and I think likely is) a dispassionate reasonable person, trying to do the best job he can and genuinely open to input from civil society. The catch is that this only applies to the micro level of a negotiating position that is flawed at the macro level.

I’m sorry, your question cannot be answered as asked

Leave it to members of the Canadian Youth Delegation to shine a light on that contradiction. (I hope it won’t come across as patronizing or pandering when I say thank goodness the youth delegates are here and making their voices heard. I’m witnessing first hand their intelligence, commitment and tenacity.) Devon Willis, a student at McGill University in Montreal, pointed out that at Monday’s briefing the room was full of “professionals, academics, workers, farmers, youth, students” and “representatives from indigenous communities and arctic communities.” In other words, she said, “all Canadians are concerned about this issue…it’s not a particular interest group that can be shoved away and not addressed.”

I smiled as I realized where she was going with this. Her question was, since groups from all over Canada are represented and expressing support for stronger action at these talks, “which Canadians are being represented in the position that Canada has taken at this conference, specifically?”

That’s the kind of question that Martin can’t touch. “You’re posing a political question and I’m not the guy,” he said, inadvertently drawing attention to the fact that “the guy,” Minister of the Environment Jim Prentice, does not make himself available to us for questions. “My role as chief negotiator is to work with government, provide advice, help develop options. When the government makes decisions on positions then it’s my job to represent those positions.” He’s not wrong, of course, but personally I couldn’t tolerate being in his position. There comes a point where “just doing my job…just following orders” isn’t a good enough defence.

Willis’ next question, a good one in my opinion, was about the dwindling numbers of NGO delegates who are allowed to enter the Bella Center where these meetings take place. Out of tens of thousands of people, by Thursday only 1,000 will be let in. By Friday that number will be reduced to 90. “Is there an alternative meeting place we can have so we can keep this dialog open?”

Again, that wasn’t Martin’s problem. “We don’t control the conference and it is true we are getting into crunch time,” he said. “I cannot offer you a different option at this meeting than this one. It’s just a constraint of the organization. I’ll be ready to meet here at 8am with those who are able to have access.” Transparency of the process, which is withering fast, is not the government’s concern.

Another member of the youth delegation, Caroline Lee, brought up the topic that’s generating the most buzz today, a report that says Canada is poised to abandon some of their already week emission reduction goals. Its being seen as proof that Canada has no intention of meeting its own targets and is therefore negotiating in bad faith. Lee knew that Martin wouldn’t address the political dimensions of the report, so she took a different tact, trying to ask him a question he should be able to answer. “How does [this report] affect Canada’s credibility in a forum like this where both developed and developing countries are ramping-up ambition, taking stronger action on climate change, and Canada’s position appears to be moving backwards?”

“First,” Martin said, “the government has made clear what its 2020 target is and we have made clear that we are working to put in place the policies and measures that will achieve that target.” Well, ok, there isn’t any objective third party in Canada that would agree that’s true, but go on. “The second part relates to we are seeking both for reasons of environmental effectiveness and economic efficiency to align and harmonize our approaches with those of the United States.” Sounds good if we weren’t, in reality, already behind the United States’ inadequate progress.

30 minutes had passed and Lee’s question was declared the last. Out in the hall the Canadian Youth Delegation knew they had been intentionally stonewalled. They don’t blame Martin; they recognize that Jim Prentice has placed him in the middle as a barrier between himself and citizens. NDP MP Linda Duncan, who was also in the briefing, tried to offer them some words of encouragement and affirmed that they were asking the right questions.

Now, the youth have turned to direct action. As I write this they are organizing a “lie-in” to take place inside the Bella Center. The point is to “express that the Canadian government has LIED to us, and we are unsatisfied with current emissions reductions target.” 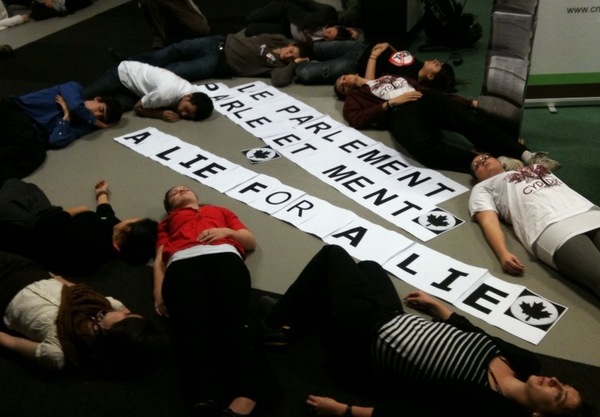 This post has been scheduled to go live at the moment the lie-in begins (updated at 10am EST with the photo of the lie-in). Photos by me and my iPhone. Opinions expressed are my own and not those of any other organization or group.