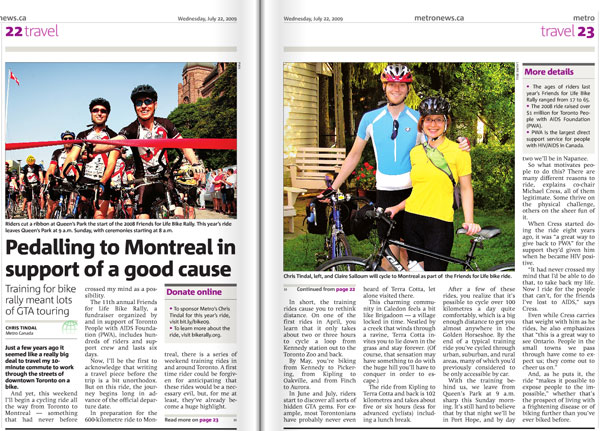 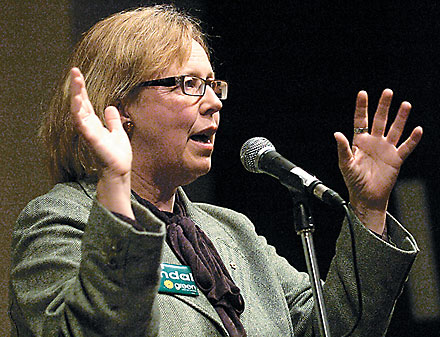 Local candidate has integrity, decency: May

Federal Green Party leader Elizabeth May dropped by Toronto Centre to promote local byelection candidate Chris Tindal at an election rally Thursday night. Dozens of Green supporters turned out to the rally, at the Pantages Hotel and Spa, cheering on party luminaries such as May, Tindal and Willowdale byelection candidate Lou Carcasole.

May spoke highly of Tindal and his role within the Green Party. As a second-time candidate, and one who increased party support greatly during his last campaign, Tindal is a member of May’s shadow cabinet as the Green Party’s democratic reform critic.

“Chris is a shining, bright example of Canadian youth, and he’s a fantastic asset to this party,” May said. “He’s always open to new ideas and has the ability to bring people together around ideas.”

May said Tindal’s integrity and decency made him an ideal representative of the Green Party, taking a swipe at the Conservatives by noting that the Greens were happy to have their candidates speak out on issues in their own words.

“You look at the way (Stephen) Harper fired (former Toronto Centre Conservative candidate) Mark Warner for being outspoken and passionate about strong issues,” she said. “We want people like Chris who can and will be themselves. They know what the party stands for and they got involved because they share those ideals.”

May also took the opportunity to critique the Conservatives’ recent budget, calling it “a budget that militarizes Canada” and “a Big Brother budget.”

She warned that the budget does little to address pressing issues such as the environment in favour of more so-called security measures.

“There will be more policing along polluted waterways, not cleaning it up,” she said.

Former Green Party leader Jim Harris addressed the assembled Green supporters by noting that the party has grown from roughly 700 members in 2003 to over 10,000 members across Canada today. He added that the budget Tindal’s campaign in Toronto Centre was more that twice as large as the entire Green Party’s federal campaign budget in 2004.

“There’s a huge opportunity in this riding for the Green Party,” he said. “We have more than 100 volunteers working on this campaign alone.”

Tindal added that support in the riding has been far greater than ever before and, though he offered a tip of the cap to his high-profile Liberal opponent Bob Rae, he said he has noticed a desire for change in the riding.

“(Rae) speaks very passionately about his vision for Canada,” Tindal said. “But in this byelection, we have a unique opportunity where we’re not choosing the government; we’re choosing one MP. If we vote in another Liberal, another Conservative, another NDP, then we’ve changed nothing, but if we make history by electing the first Green MP, then we’ve changed politics in Canada forever.”

The byelection will take place on Monday, March 17.

Taken from this full article in the Town Crier.

For Green Party candidate Chris Tindal, the Toronto Centre byelection comes down to choice. According to the partyâ€™s slogan, â€œShift Happensâ€.

The 26-year-old is the youngest candidate in the riding, and heâ€™s ready to be the first Green MP in the House of Commons.

â€œThe need for Green voices in Parliament has only become more urgent,â€ he said Jan. 24 while taking in the atmosphere of a Yonge and King coffee shop. â€œI think what we need right now in Toronto Centre is a voice of the future, some fresh ideas, new energy and a different approach.â€

Tindal, who finished fourth out of eight candidates in the 2006 election, is confident in his ability to represent his constituency in Ottawa.

This time around, the Green Party is better equipped and is garnering more support from residents willing to consider an alternative to traditional parties, he says.

â€œWeâ€™re better organized, have more volunteers, more funding, and we have a lot more supporters,â€ he said. â€œThere is a lot of excitement around this byelection presenting a unique opportunity to send a strong message of change.â€

That change is all about what people value, and right now the government is not focusing on what Canada needs, he says.

â€œI donâ€™t think where our government is spending money reflects the kinds of things that people value,â€ Tindal said, adding family time, health, volunteerism and strong communities are top priorities. â€œThose are all the sorts of things that we want, and yet the actions that our governments are taking are not in aid of those things.â€

Tindal emphasizes the Green Party is about more than the environment, although it remains of fundamental importance. He affirms that his party has positions on all major issues, from Afghanistan to crime prevention and health care.

Another point that Tindal says sets him apart from other candidates is his commitment to implementing a carbon tax.

He explains that a carbon tax would shift taxation from income to carbon use, thereby reducing the amount people pay in income tax and emphasizing smart energy use.

â€œItâ€™s a critical tool if we want to tackle reducing greenhouse gas emissions effectively without harming the economy,â€ he said, â€œItâ€™s the right thing for the economy and the environment, and I think both are in a crisis right now.â€

I’m pretty sure “red/green” puns have jumped the shark and should now be filed under any headline having to do with Kermit’s observations on how easy being green isn’t, but I’m not going to file a complaint or anything. From today’s Toronto Star:

NDP Leader Jack Layton‘s dalliance with the Tories on the issue of Senate reform is raising eyebrows among Green party members.

But when Harper and Layton talked recently about parliamentary reform, it was the Senate â€“ not proportional representation â€“ that was Layton’s priority. Layton is proposing a national referendum on the future of the Senate and Harper offered his tentative support for the idea.

Yesterday, Layton was in Calgary to “shore up the support of Western Canadians in the NDP’s bid to hold a referendum on the future of the Senate.”

So what about proportional representation?

“Since Parliament can realistically only deal with one democratic reform issue at a time, Mr. Layton’s out-of-nowhere proposal to abolish the Senate is at odds with the NDP’s traditional support for reforming our voting system,” Chris Tindal, the Green party’s democratic reform advocate, said in a statement. “What has happened to his priorities and his promises?”