Torontoist invited me to contribute to this yearâ€™s Heroes and Villains. Yesterday I shared my hero pick. Now here’s my villains submission.

Last year, Torontoist readers voted Stephen Harper, Jim Flaherty, et al. the number one villain of the year. Since then, their governance has gotten even worse. Even if you sympathize with the Harper government’s policy objectives, it’s hard to support the way they’ve gone about accomplishing them. Despite expressing respect for the will of Parliament while in opposition, Stephen Harper’s Conservatives have done everything they can to obstruct Parliament from functioning properly in a minority situation, to the point of breaking their own fixed election date law for pure political advantage. In other words, this government has given the opposition parties no shortage of fodder.

And yet that opposition has failed, repeatedly and consistently, to offer an alternative that catches the imagination of voters. The Liberal Party, for example, was specifically mocked for their reluctance to vote against the government (perhaps most memorably in a flashy Rick Mercer musical number). In the election that ultimately took place anyway the Liberals received their worst result in recent memory, while the New Democratic and Green parties also failed to make any significant inroads.

With such a vacuum of popular political options another smaller or newer political party might have found its niche (as QuÃ©bec Solidaire recently did in the Quebec provincial election), but none of the nineteen registered Canadian political parties offered anything that caught the public’s attention.

This failure is mostly due to communication and political problems rather than policy ones. It’s not that the opposition parties haven’t had any good ideasâ€”they haveâ€”but rather that they’ve been completely unsuccessful in communicating those ideas in a compelling way. This impotence was epitomized by the year-end coalition debacle, where the opposition leadership allowed perfectly legitimate and potentially exciting democratic cooperation to be successfully characterized by the prime minister as some kind of separatist coup.

As a result, the highly objectionable government of Stephen Harper has been allowed to continue to exist essentially without opposition. To be clear, only the Conservative government is responsible for their actions, but that doesn’t mean the opposition parties can be left off the hook for their failure to perform. No matter what party or ideology is in government, our democratic system relies on an effective opposition to function properly. Here’s hoping for better in 2009.

Torontoist invited me to contribute to this year’s Heroes and Villains (“the people, places, and things that we’ve either fallen head over heels in love with or developed uncontrollable rage towards over the past twelve months”). Below is my hero entry. Interesting to read similar sentiments in The Toronto Star.

In the years leading up to the present economic collapse, economist Peter Schiff made numerous appearances on American news networks foretelling the coming maelstrom with uncomfortable accuracy. His prescience was roundly rewarded with mockery, not just from the other guests but also from the network hosts themselves. (Torontoist can’t help but feel a certain amount of empathy with Schiff. In last year’s Heroes and Villains, we wrote that “the subprime mortgage crisis, which began late last year but really picked up steam in the last few months, is not going away. In fact, it is a trigger incident that will continue to unravel the American economy into 2008, almost certainly leading to a recession and likely a depression.” That entry, for what it’s worth, received only 1.1% of the villain votes. It’s fine. We’re over it.)

Now that some of the worst-case economic predictions are playing out, smugly saying “I told you so”â€”while satisfyingâ€”isn’t particularly helpful. Many of the economic myths we’ve grown up with are being systematically dispelled, so simply rebuilding the economy as it was before this collapse is inadequate. Instead, we must re-imagine how our economy functions and what we expect it to do for us.

Enter Peter Victor, an economist at York University. For the last several years, Victor has been pursuing, in his words, “a topic which is anathema to most members” of his profession. Specifically, the idea that “people in rich countries can and should manage without economic growth,” not just because “it is implausible that the biosphere can support the nine billion people…who are expected to be on the Earth by mid-century at a standard of living remotely like that of current day North Americans,” and not just so that “people living in poorer countries can enjoy the benefits of economic growth where it really makes a difference,” but because “there is plenty of evidence to show that economic growth is doing very little to increase the happiness of most of us in rich countries.”

Victor’s timely new book Managing Without Growth: Slower by Design, Not Disaster argues that government should shift its focus away from economic growth as its pre-eminent policy objective towards more effective measures of well being, and offers specific ideas on how to get there within a Canadian context.

Like Peter Schiff, Peter Victor will likely face strong opposition from some. Proposing to overhaul some of our most basic assumptions about how economies should function is no easy task. But that’s part of what makes it courageous, and perhaps just a little bit heroic.

Actual photo of Claire’s parents’ dog Archie and cat Kit, taken a few weeks ago. Claire refers to them as my “dog and cat in law.” Merry Christmas! 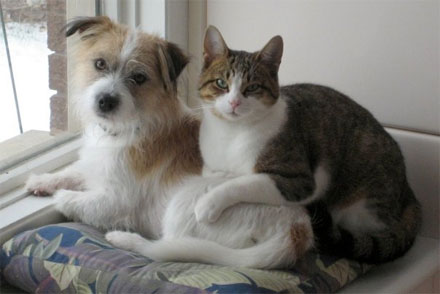 There has been some confusion, due to a lack of information, about my status. A brief update:

March 18th – With the completion of the March 17th by-election, I cease to be a candidate for Parliament. I inform the Toronto Centre riding association and the leadership and organizing staff of the Green Party of Canada that if there is another election in 2008 I will not be a candidate. I also inform the other groups I’m a part of (including the Federal Campaign Committee) that I will need to take some time away from volunteer duties to focus on work and family.

August – Elizabeth May and I discuss the fact that since I’m no longer a prospective candidate I’ll need to be replaced on Shadow Cabinet (being a candidate is a prerequisite of being a member of SC). I suggest some people to replace me. I don’t know how to determine the exact date when I ceased to be a member of the Green Party’s Shadow Cabinet, but I am definitely no longer on SC now.

November 5 – The Toronto Centre Federal Green Party Association holds an AGM. A new executive is selected; I do not stand for reelectionÂ  (I was previously a member at large).

December 10 – I resign from the Federal Campaign Committee. The timing was partly due to the fact that the FCC, under a new chair, restructured to include only functional positions that require a significant time commitment. In practice I had been an inactive member of the committee since the March by-election.

As of right now, my only title or status with any political party is that I remain a member of the Green parties of Canada and Ontario.

Finally, just to be extra clear, in case any of you were wondering I am totally not this guy.