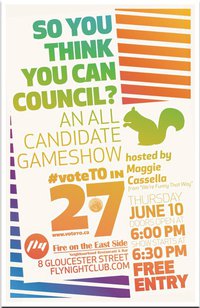 I’m pleased to let you know that this Thursday is the first all-candidates event of the campaign. I say “event,” because this is decidedly not a straight-forward debate. Instead, my opponents and I are told we will “have to work with and against each other in a series of game show–inspired challenges that test civic knowledge and comprehension.” In other words, it should be a fun night, in addition to being informative.

Hosted by Maggie Cassella, “#VoteTOin27: So You Think You Can Council?” takes place this Thursday June 10th at Fly Nightclub (8 Gloucester St). Doors are at 6 p.m., with the program starting at 6:30 p.m. The event is free, but in order to ensure admission it’s recommended that you RSVP for free tickets by clicking here.

Hope to see you there!

There is a lot of conversation and concern in Toronto’s Queer community surrounding the news that Pride Toronto is drafting a “freedom of expression policy” that will govern what signs will be allowed in this year’s parade. Pride’s Executive Director Tracey Sandilands has said only language that incites “violence or hatred” will be disallowed, but concerns remain that those words are not defined and could be broadly interpreted. It’s hard to not see this unprecedented development as a direct response to last year’s parade participation of a group called Queers Against Israeli Apartheid (QuAIA) which caused controversy.

The situation is a challenge for those like myself who would represent the Church/Wellesley Village at city hall. While the conflict in the Middle East is obviously not and should not be a civic issue, nor is the definition or prohibition of hate speech, the councillor of Ward 27 must be a clear and unapologetic advocate for the LGBT community. They must also represent those members of our community who find some of the language that was used by participants in last year’s Pride highly objectionable. How does one person walk that line?

I think we begin by working to find common ground. Something straight people like myself need to understand about the Queer community in general—and the history of Pride in specific—is that censorship, perceived or real, is anathema. The Pride celebrations we know today owe their very existence to the rejection of pressures that would try to control, silence or sideline unpopular or disruptive voices. Many in the queer community I’ve talked to in the past few days view any attempt to filter or sanitize the Pride parade in anyway not only as a huge step backwards, but a dangerous one that summons memories of the days not long ago where so many people were not able to openly acknowledge their own sexual or gender identity. (Not that that stigma has been completely defeated, but we’ve come a long way and we don’t want to go back.)

Similarly, something non-Jewish people—again, like myself—need to understand about the Jewish community is that they have an extremely high sensitivity towards any language that even flirts with the thin edge of the slippery slope towards anti-Jewish or anti-Israel (in the “Israel should not exist” sense) sentiment, and for good reason. Like with the Queer community, this sensitivity comes from a memory of a time not so long ago when mere words helped to set off one of the most horrific series of actions in the history of humankind. Today, we hopefully don’t need to be reminded, antisemitism is still a present and persistent threat that must be vigilantly identified and condemned.

There, simultaneously, is the source of tension and also the opportunity for common ground. Members of these two groups find themselves in conflict over where to draw the line when it comes to freedom of expression. Not only that, but their definitions of what kind of uncomfortable speech should be tolerated are, in some ways, at the core of their communal histories. And yet, they are united by an oppressive past and an understanding of prejudice and hatred that all too often persists. They share a desire to fight ignorance, to defend their rights and to proudly celebrate their identities.

The question therefore becomes, what is the best way to accomplish those shared objectives? In the struggle between defending freedom of expression and preventing groups from being targeted, what wins out?

In this specific case, sunlight is the best disinfectant. Instead of allowing intolerance to breed in dark corners, let’s bring it out in the open so we can name it and repudiate it in public. Or, as Xtra’s Marcus McCann put it, Pride Toronto should go so far as to “[endorse] free expression for those who are anti-gay; it is better that they are laughed out of the commons than their opinions be allowed to fester in private.”

Using the words “apartheid state” to describe Israel, as one group did in last year’s Pride parade, is hurtful, dangerous, and displays a titanic misunderstanding of the complexity of the situation. But it’s not the job of Pride organizers to serve as arbiters of what amounts to allowable protest. If it comes down to it we already have laws against inciting violence or hatred. Keep Pride free, as it should be, and let individuals be judged for how they choose to use that freedom.

Rocco Rossi’s speech to the Empire Club yesterday [PDF] has generated a lot of discussion, especially his pledge to end “the war on the car” by opposing bike lanes on arterial roads and halting planned transit construction. Underscoring that discussion is the news that another pedestrian was killed on our streets this morning, a tragedy that also brings pedestrian safety and infrastructure to mind.

I am reminded of a conversation I had while in Copenhagen last month. One of the first things you notice about Copenhagen is their extensive cycling infrastructure and how well it’s used. The climate in Denmark is similar to ours (while I was there it was cold and snowing) but because bike lanes are wide, separated, part of a large network and receive good snow clearance, they’re used year-round by large numbers of commuters and families. When I told a local woman named Anna Sophia how impressive that was, her first reaction was to lament that it wasn’t nearly good enough. “Amsterdam has a great cycling culture,” she said. “Ours is OK.”

Then I told her how many bike lanes are available to Torontonians, what they’re like, and the fact that efforts to expand our bike lane network are met by some with the “war on the car” accusation. She laughed, and said two things. First, “that’s such a Canadian/American thing to say.” (I don’t think she was trying to be hurtful.)

The second thing is what really stuck with me, though. She said, “I can’t imagine what this city would be like without our bike lanes. Everyone would have to drive. It would be so congested and impossible to get around.” The realization hit me like a tonne of bricks: she’s describing Toronto.

As Hamutal Dotan wrote for Torontoist earlier today, “what we need—urgently, and very badly—is to measure the success of our roadways by how well they move people, not cars, and privilege the modes of transportation which are most efficient at moving the largest numbers of people.” Rossi was absolutely right when he said that “cars are simply a necessity for many people,” and planners need to recognize that. However, his contention that this city suffers from too much traffic congestion due to a “war on the car” is backwards: the fact that we have so many cars on the road causing congestion is a direct result of urban design that has disproportionately favoured cars over other methods of transportation. The idea that we can somehow accommodate more cars on downtown roads while improving traffic conditions is fantasy. The best way to improve driving conditions is to offer better alternatives to driving.

All of our best research shows that when people have a transit system that works and treats them with dignity and a cycling infrastructure that doesn’t make them fear for their safety, they take advantage of it and drive less. That means fewer cars on the road, which means less congestion for those who choose or need to continue to drive. Drivers (a group that, as an Autoshare member, I include myself in, along with being a cyclist, pedestrian, and transit user) who want less congested streets should favour “complete streets” that do a better job of balancing different transportation options.

When we launched this campaign yesterday I shared a letter outlining why I’m running and some of the policy issues I intend to focus on in this election. Today I want to take a step back and talk about principles.

Policies are specific ideas meant to address specific problems. When we go to the polls on October 25th, many people will likely vote based on which candidate has, in that voter’s assessment, the best set of policies. Also important, however, are a campaign’s principles. Principles are more broad and foundational and less fickle than policies. They’re what one uses (or should use) to make decisions and form policy positions. (In other words, instead of asking “what will get us the most votes? what can we get away with?” and so on, campaigns should ask “how do we stay true to our principles?”)

This afternoon we’ve added a new permanent page to this website that outlines and explains our principles. This campaign will be:

Open. We will use both web-based tools and in-person meetings of all kinds to engage with people and make this election about ideas rather than personalities. We will also interface with and draw inspiration from initiatives like ChangeCamp, Better Ballots, #VoteTO and others which seek to engage a broad spectrum of people in civic idea generation and decision-making.

Uniting. It’s tempting for politicians of all stripes to attempt to score points by applying labels to different groups of residents and then pitting those groups against each other (drivers vs. cyclists, union members vs. non-union members, TTC operators vs. TTC riders). When we do that, however, we fail to move forward together. Only by building an inclusive movement that respects all Torontonians can we create the city we want.

Future-oriented. We will make decisions that address the needs of the present generation without sacrificing the rights and prosperity of future ones. We will build a city that we’re proud of today that will also serve us well tomorrow.

Again, these are not meant to be specific policy commitments, but they are declarations of how you can expect the members of this campaign to behave and on what we will base our platform. And, in keeping with the first principle, we’ll do all that together.