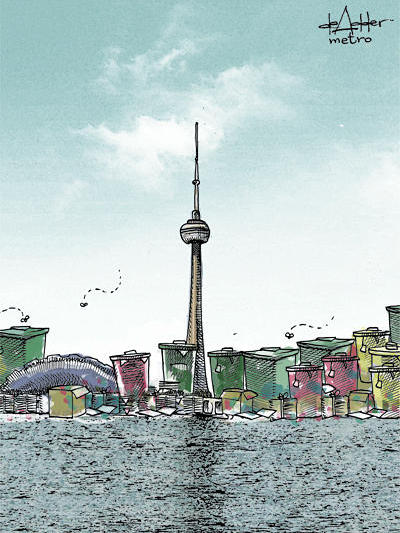 Since Google Transit launched in December 2005 it has been adding Canadian cities one at a time. That list has grown to include Hamilton, Ottawa, York Region, MontrÃ©al, Vancouver, Fredericton, and now, announced yesterday, Calgary. Canada’s largest city, Toronto, is conspicuously absent. That’s an embarrassment for the City and the TTC.

Google Transit is a service that works with Google Maps to help people plan trips on public transit (instead of just by car, as the first version of Maps did). A visitor to the site enters their start and end points, and Google gives them step by step instructions for reaching their destination (walk to the corner, wait for the 5:00pm bus, transfer to the subway, etc). The system uses schedule data to know when you need to show up at each transfer point, and to estimate how long the total journey will take.

Google reportedly provides this service to municipalities free of charge. All they ask is that those municipalities provide them with their transit schedule, stop and route data. Then Google does the rest of the work. For free.

Back in March 2006, then TTC chair Howard Moscoe gave reporters the impression that Google Transit was coming “soon” to Toronto, but days later a report from Chief General Manager Richard C. Ducharme was seriously lacking in enthusiasm for partnering with Google, even while noting that going it alone would cost the City $2,000,000.

In December 2006 I wrote TTC commissioners urging them to work with Google on transit routing, and suggesting (correctly, I think) that they’d be able to rapidly compile the data for Google using volunteers from Toronto’s enthusiastic transit and web development communities. Adam Giambrone’s office replied to let me know that they were “working on getting the TTC on Google Transit” and that “hopefully it will be up and running soon.” Interim Chief General Manager Gary Webster wrote to say that “the TTC considers the development of its information and communication resources to be a very important item” (try saying that three times fast) and that they had “participated…in some preliminary information gathering sessions with Google Transit project leaders.” Finally, he added that since “TTC staff are involved” he would “respectfully decline” volunteer help.

At the time of that correspondence, there weren’t any other Canadian cities on Google Transit. Now there are seven. When Hamilton was added three months ago, the Hamilton Spectator asked how it was possible that Hamilton had beaten Toronto in the race to get on the service. The answer? The city of Hamilton was “very co-operative” in the partnership, a Google spokesperson said.

After Hamilton was added, Mayor David Miller and TTC chair Adam Giambrone reaffirmed their desire to get Toronto on Google Transit, providing a target date of “mid-2009,” but the experience of the last three years suggests that the City is not taking it seriously and has been incapable of putting together an effective plan for making it happen. (Contrast this with bigger, more organized and resourced cities like, say, Fredericton, New Brunswick.)

Meanwhile, the TTC is still developing their own separate routing system (“Future home of Trip Planner,” ttc.ca currently declares in a randomly orphaned piece of text) which is off-schedule, costing us millions of dollars, and will arguably be redundant with the Google service (though at this point final judgment should be reserved until we can see both services in action).

It didn’t have to be this way. The fact that Google Transit was going to become a great partner was easily predictable, as was the fact that the TTC would ultimately mismanage their own very expensive alternative trip planner. The only silver lining is that we’re now, finally, hopefully, only months away from being able to plan transit routes online.

I arrived about thirty minutes early for last night’s debate, which was fortunate, since by the time things got going it was standing room only in the Innis College auditorium.

Of the currently thirty people running for Mayor of Toronto, only two were invited to participate in the debate: His Worship (we’ve got to get rid of that title) Mayor David Miller, and Councillor Jane Pitfield. I suppose the thinking was that they’re currently the only two “serious candidates” running. Well, Jane may have tested that assumption.

Don’t get me wrong. I don’t think that everything Jane Pitfield says is crazy, nor do I agree with everything David Miller says or does. But good gosh, is she even listening to herself? Here are some of my personal highlights from last night:

You can see why, by the end, I had a very hard time following her arguments. The most useful thing she contributed were some ideas on waste management, though if that’s your issue, then Rod Muir is your candidate.

Where David disappointed was when he completely ignored a comment about the secret Gardiner Expressway report that he’s refusing to make public. If you’re going to be keeping reports a secret, the least you can do is explain why.

The highlight of the night, however, came after the debate, when three media outlets (CFRB 1010, 680 News, and The Toronto Star) interviewed me about what I thought of the candidates. “That’s funny,” I thought, “none of them ever interviewed me when I was a candidate.”